Last year I watched a fascinating interview with reclusive investor Tony Deden where he recounted meeting an Arab date farmer who had inherited an orchard of a thousand trees.

On a tour of the orchard he asked the farmer out of curiosity "how long will it take this tree to bear fruit?"

The farmer replied, "well this particular variety will bear fruit in about 20 years. But that is not good enough for the market. It may be about 40 years before we can actually sell it."

It was clear that the farmer couldn't possibly have planted all of those trees himself, his ancestors must have nurtured them for decades knowing that they wouldn't see the full payoff in their lifetimes.

Their time preference was so low that they were willing to labour towards something that would not benefit them directly.

But many of the structures in our society are designed to increase your time preference.

Why not buy something now if you can pay it off later with no penalty?

The fitness industry is particularly guilty of this, promising unrealistic results over unrealistic timeframes.

And while you're busy chasing those false promises, you're not investing in any of the things that will give you a bigger payoff in the future.

Social media plays an important role, demanding emotional reactions from you, pandering to your immediate impressions, and discouraging careful consideration or reflection.

It's not designed to be chewed and digested, but simply tasted.

This is one of the reasons why I don't follow anyone in the fitness industry who I'm not friends with in real life.

Spending time picking apart all of the logical inconsistencies in someone else's social media output is unhelpful, but there is value in understanding the broad categories of errors which are being propagated.

This particular example was shared by a friend and I think it's instructive. 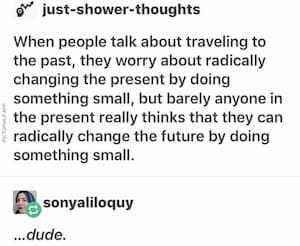 This kind of thinking is popular now, exemplified by books like Atomic Habits.

When you don't behave the way that the economic models predict, your behaviour is labelled irrational.

But the problem is that economics is wrong.

And one of the reasons it's wrong is that it doesn't understand ergodicity.

Ergodicity basically means that averages over space are the same as averages over time. You can find the technical definition here.

In other words, ergodicity means if I roll a single die 1000 times it's the same as rolling 1000 dice at the same time.

That's true for dice, but not true for everything. 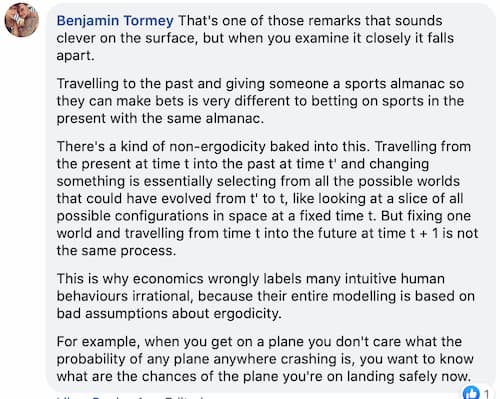 Yes, I do have a lot of free time.

Now to explain why I brought up this example.

While having a low time preference is good because it enables you to reap greater future rewards, it's not the whole picture.

In fact, I would argue that people do see the power of those changes but they discount them because they are uncertain.

Why commit your time to something if you're not sure it will pay off?

That's why I believe if coaching has value it's because it provides a degree of certainty, allowing you to trust in the changes you're making.

And the reality is that the human body doesn't work like compound interest.

In other words, regardless of how small and manageable you make the changes, the results will never respond linearly.

The way I think about it is like playing an infinite game.

The object is not to win each round, but to make it to the next one without losing or overcommitting.

Small changes, big changes, periods where you don't change anything at all, it doesn't matter as long as you stay in the game.

That brings me to my final point, illustrated by this next post.

Let's pause and think about this for a moment, using weight loss as an illustrative example.

We know that a calorie deficit is the only way to achieve weight loss due to the laws of thermodynamics.

It doesn't matter how you achieve that calorie deficit, although there are certainly better and worse ways to do it.

But by definition weight loss is not sustainable.

In other words, it's not sustainable by design, regardless of what method you use.

Not only that, but your body is dynamic and adaptive, it doesn't benefit from or even tolerate constant stimuli.

An interesting and topical example by Nassim Taleb is that lung ventilators with continuous high pressures are harmful, but occasional spikes of high pressure are beneficial.

Your body thrives on noise.

If you follow the same program and use the same weights long enough, eventually you won't see any positive adaptations occuring.

Does that mean weight training is unsustainable?

No. It means that what is sustainable for you is constantly changing over time.

Allow me to indulge by quoting myself:

"Sustainability is a function of your psychology, your resources, and your efforts, not a general rule for everyone."

You must examine if your time preference is compatible with what is sustainable for you and adjust your goals and methods accordingly.

And most importantly, keep playing the infinite game.

Focus on what matters, take back control

Join my free newsletter and you'll get proven frameworks and strategies to master your mind, body, and impact every area of your life.